For the artist Bodil Örs, the landscape is a primary
motive where the result differs greatly from painting
to painting. This is because her paintings are not
“landscape portraits” – she does not reproduce the
landscape, but her idea of it. The painted landscape
is linear and planar, but Bodil Örs has added volume
and space. It is not an attempt to tame nature, but
the expression of a wish to preserve and bring to
light that which could be called nature’s state of
mind – a combination of fragmented personal
recollections and the landscape’s “ personality”.
It is also a struggle to bring chaos and discord
partially under control, to also reveal the constancy
and harmony of a landscape that is far  older than
humanity.

Bodil Ors divides her private and artistic life between
Turkey (Iasos) and Denmark (Snekkersten), and
naturally, this cultural duality has left its imprint on
her art. The influence of Turkish intellectual life is perceptible, but Turkish culture is far more than – as has so often been stated – the connecting link between Europe and the Middle East and Asia. Turkish culture in itself is so multifaceted and full of contrast and opposites that it is perhaps more appropriate to speak of many cultures – many treasure chests.

Even though Turkish culture plays a major role, the immediate inspiration for many of the works is taken first and foremost from the Turkish landscape: the ancient peninsula of Iasos with more than 5 000 years of continuous habitation behind it; the impressively large Baffa lake and the Latmos Mountains with the many gigantic boulders that lie strewn over the landscape as if thrown there by titans.

There is clearly a strong fascination with the monumentality of the landscape, though it never lapses into empty pathos – rather a fervour or intensity expressing both veneration and solidarity. When the landscape is viewed though an artistic temperament, it reveals a new dimension of grandeur and passion.

Several of the paintings are sustained by vitality and enthusiasm, while others are a combination of subdued elation and – often – quiet melancholy, but always with a sense of liberty with regard to the colour scheme as well as the sculptural adaption.

Although the majority of paintings radiate a spontaneity and simplicity,  they are clearly painstakingly worked through, a technique one,  for the want of a better phrase - could call expressive "slow - painting".

Human forms are not immediately present in the pictures, but they are nonetheless - enshrouded in the transitory nature of civilisations that echoes from the landscape, they permeate the surviving country side. In the paintings from Iasos,  it is as if narratives from  5000 years of civilisation radiate from the canvas with great energy and strength. The primordial force that is worked with her, also brings to mind metaphysical landscapes witch could be populated by characters from the writings of Tolkien.

The breadth in Bodil Örs art is demonstrated by among other things, the sense one minute of Klee's palette, followed by references to the figurative element of Matisse an Cézanne, to Turners colour explosion, and to something that leads one's thoughts to more monochrome variations of Kiefer. And every now and then, one senses an almost instinctive use of iconographic quotations from the rich ornamentation of the Middle East. One experiences in her works a carefully orchestrated symphony that is  held together by a fervour and down- to- earth strength.  She literally purifies and simplifies the landscape with the help of the four elements of antiquity: earth, water, air and fire.

To pass on one's feelings and experiences demands - as well as artistic nerve - an educative undertaking.  In this respect, Bodil Örs can draw on her many years experience as an art educationalist.  The fact that  she not only underwent a personal development as an artist,  but also contributed to many students gaining a deeper understanding of the essence and substance of art, can be perceived in numerous paintings where she to a great extent assist the observer in entering her universe. 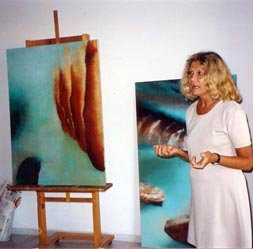